“The Church today demands a profound renewal of celibate priesthood and the fatherhood to which it is ordered.” 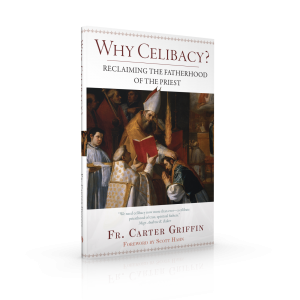 In a critical moment for the Catholic Church, Why Celibacy? brings light and hope with a new perspective on the Church’s perennial wisdom on priestly celibacy. Fr. Carter Griffin shows what true fatherhood is, and how it can direct priests to more faithfully serve the Church.

In Why Celibacy? readers will find a meaningful proposal for building up the Church and supporting not just priests, but all fathers.

Fr. Carter Griffin is the Rector of Saint John Paul II Seminary in Washington, DC. He is a graduate of Princeton University and a former line officer in the United States Navy.

Get one for yourself and your priest! Order two or more copies and get 20% off!